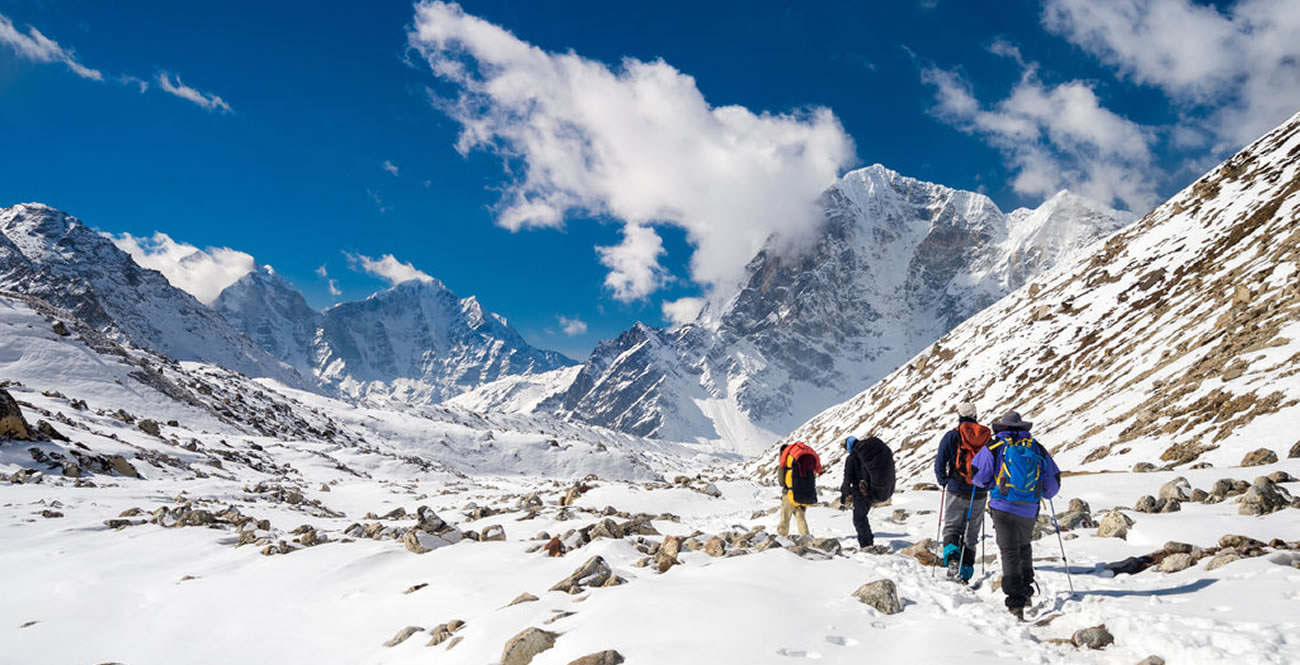 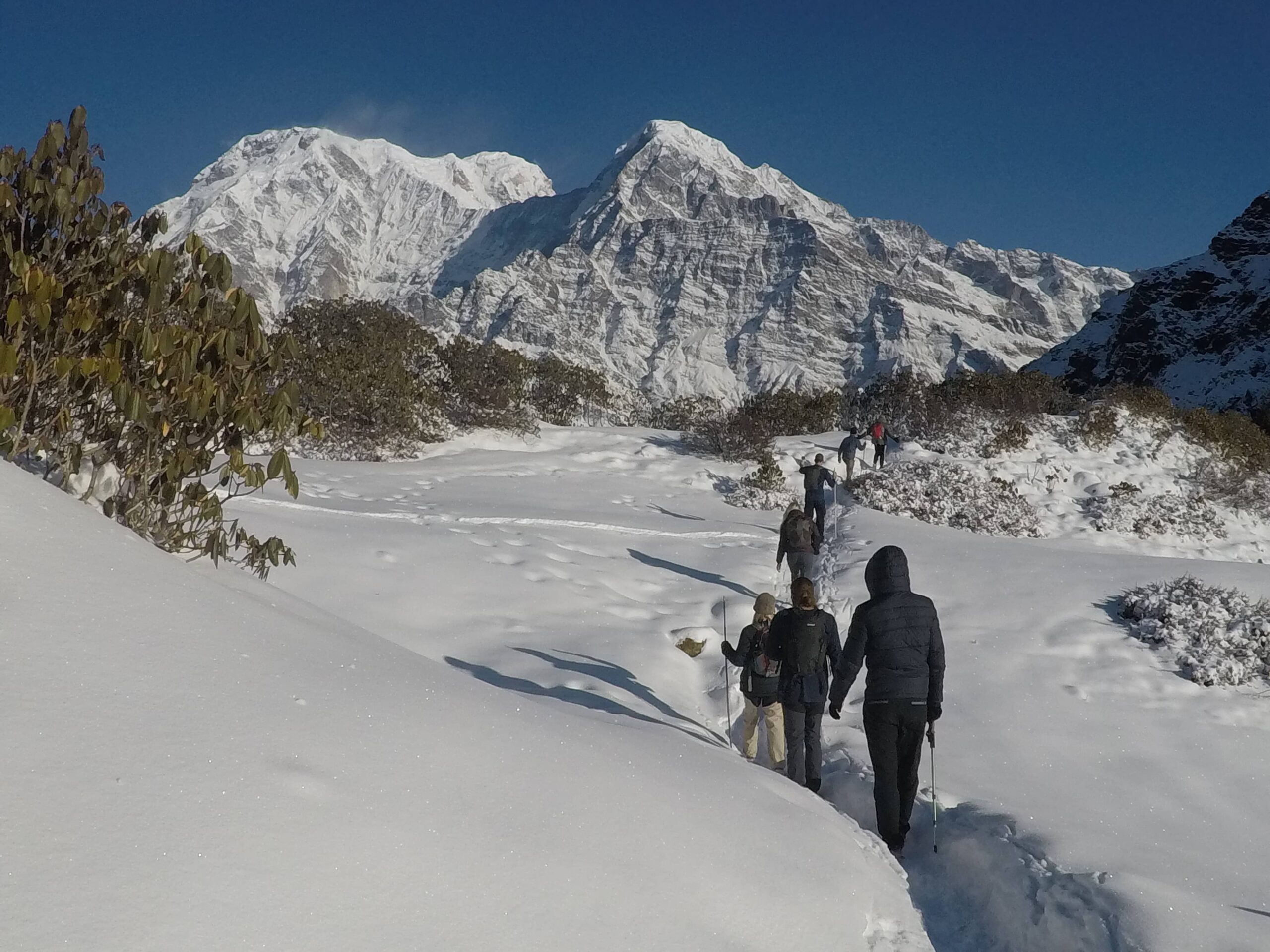 The Mardi Himal Trek takes trekkers through an isolated area of the Annapurna region to present an unadulterated and less-trodden path that meanders towards the base camp of the Mardi Peak. It is a journey that is an off-the-beaten-path adventure, perfectly suited for trekkers who are looking for destinations with fewer crowds. The Mardi Himal Trek is located just east of the famous Annapurna Base Camp Trek and presents trekkers with a less-frequented terrain flanked by the Machhapuchhre Peak.

The journey is also a great way to experience the authentic cultural diversity of eastern Annapurna. Villages of Gurung and Magar ancestry are scattered throughout the trekking trail, each with ethnic groups that speak their dialect and have their unique cultural traditions.

It is a common sight to come across herds of domesticated cattle heading off to pastures while trekking. Passing through the villages, trekkers can also see most local people involved in activities like pottery, producing and selling handicrafts and collecting medicinal plants.

In like manner, the cultural beauty of Mardi Himal Trek is equally rivaled by its unique and notable wildlife as well. The variation of forest cover persisting in accordance with altitude and topography provides a wide range of habitats to several animal species, especially for a wide variety of migratory spring and autumn birds.

The trekking journey to the base camp of Mardi Himal starts from Pokhara. The city of Pokhara is usually the starting point of many of the Annapurna region’s treks. Usually, trekkers can drive from Pokhara to Phedi and then start the trek from there, following the path that then leads to the village of Pothana. From there, the path then snakes through the alpine foothills of the river valley until eventually, it rises in elevation and branches out above the tree-line at 3,300 meters.

Once the tree-line is crossed at a site called High Camp, the change in the terrain is quite noticeable. The emerald woodlands of the lower foothills now resemble rugged high mountain landscape with the skyline decorated with amazing panoramic views of the Annapurna peaks. The Mardi Himal Trek also presents a wide range of topographical features of the eastern Annapurna region. The path initially starts through sub-tropical lowlands where lush rhododendron woods cover the landscape in bright canopies. The woods also harbor many species of orchids.

Likewise, throughout the journey, trekkers are in constant company with views of the Himalayas like the Annapurna massif, Mount Machhapuchhre, the Gangapurna Himal, Lamjung Peak, the Tukuche Peak, as well as the Mardi Himal among many others. From the lowland woods, the Mardi Himal Trek has pathways that then branch up the elevation towards pine-clad hills and juniper hamlets until the tree-line is crossed and the terrain then becomes a mosaic of alpine shrub-land and vast meadows.

The Mardi Himal Trekking journey begins from Pokhara. Trekkers can opt to take a short flight from Kathmandu to Pokhara, or they can drive to the lake-side city. As stated, from Pokhara, the next destination of the trek is a site called Phedi. From there, it is a steady trek through the woods towards Dhampus, and then to Pothana.

The next overnight destination along the Mardi Himal Trek is a site called Forest Camp. The pathway from Pothana leads to a place called Pitam Deurali. This is where the trail diverts away from the main Annapurna Sanctuary Trek and instead runs through the dense oak woods towards Forest Camp. The forests along the journey are dense and brimming with avifaunal life. The Forest Camp, also known as “Kokar” offers quite basic lodges for accommodation and rather imitates a homestay experience.

The Mardi Himal Trekking trail continues from Forest Camp to Low Camp, darting through some of the last low-lying woodlands. As the trail picks up elevation, the vegetation along the terrain changes as well, from mighty woods to alpine shrubs. Rhododendron trees tend to be covered with moss and lichen, and eventually- the landscape becomes embedded with ferns. Low Camp presents mesmerizing views of Mount Machhapuchhre rising above the valley.

Trekking an hour or so from Low Camp, the trail finally breaks out above tree line and opens towards vast meadows and pastures that are more rugged. The western skyline is decorated with the view of the Annapurna South and the Hiunchuli Peak. The trail continues along the Mardi Himal ridge, mainly snaking through grass pastures where isolated rhododendron bushes ornament the otherwise even land. Colorful Danphe pheasants are often spotted on this section of the trail.

High Camp presents breath-taking views of the sunrise amidst the Annapurna Peaks. From High Camp, the path then twines up the ridge towards Mardi Himal Base Camp. The path to base camp is a well-established trail that traverses through the grasslands and includes a couple of steeper sections. The pastures here are often laden with grazing Dzos (yak/ cow crossbreds), as well as fluttering Danphe pheasants. In the summer, herds of sheep and goats from lower villages are brought up to graze in the area. As such, several herder’s huts are scattered along the trail. The path finally reaches the base camp of Mardi Himal from where one can look down into the Annapurna Sanctuary in the valley below, as well as panorama views of the spectacular south face of Annapurna and all of the peaks that surround the Sanctuary, including Hiunchuli and Machhapuchhre.

The best time for Mardi Himal Trek is during the spring and autumn months. Spring occurs from March to May, and autumn lasts from September to mid-December. Although Mardi Himal Trek can be done all year round, the spring and autumn months provide the best visibility and clarity of the peaks.  The weather conditions during these peak-trekking seasons remain suitable for trekking with very little chance of precipitation or other bad weather conditions. As such, they also present fewer chances of Kathmandu-Pokhara flight cancelations.

As the Mardi Himal Trek is an off-the-beaten-paths journey, the accommodations along the trip are quite basic. Lodges are available for accommodation, and generally- they come in the form of small wooden wood-lodges with one dining area and small rooms with a sleeping bed.

However, in most lodges along the trek, there are no dining areas and meals are instead had in the kitchen itself, often with the family of the lodge-owner, evoking a home-stay experience. Usually, it costs about US$ 3 to US$ 10 per night. But the cost, of course, depends upon the quality and standard of lodges.

Likewise, both vegetarian and non-vegetarian meals are available during the trip. Although the food variety might not be grand, almost all lodges serve the staple food of Nepal- Dal Bhat (Rice and Lentils). It is important to carry food-allergy medications.

It is advised to exchange foreign currency into local Nepali Rupees before the trekking journey. Mardi Himal Trek offers an isolated trekking experience and there are no ATMs or banks along the route. Thus, carrying local currency can help reduce the hassle. It makes it easier to buy and pay for things in the mountains.

Similarly, during peak trekking seasons, flights to Pokhara can be over-booked. The same goes for hotels in Pokhara as well. Thus, booking the trip early can help in reducing the chance of being caught up in the hassle of over-booked flights or delays.

The Mardi Himal Trek is a moderate trekking trip and does not require one to have prior trekking experience to undergo. However, it is best to prepare oneself physically before the beginning of the trip. Doing regular cardio exercises like running and swimming can boost the body’s stamina and help during the trek.

Mardi Himal Trek is a beautiful hidden gem of the Annapurna region. It presents unexplored trails and new destinations to visit besides the popular routes of the region. The cultural setting along the journey also has a more authentic feel to it. It is a gorgeous journey through untarnished woodlands and far-off villages of the Annapurna where stunning sights of the Annapurna peaks are presented magnificently for trekkers to enjoy. There is no age limit to doing the trek, and the chance of Acute Mountain Sickness (AMS) occurring is also quite less. It is an awe-inspiring trip that encapsulates the best obscure features of the famous Annapurna region of Nepal.