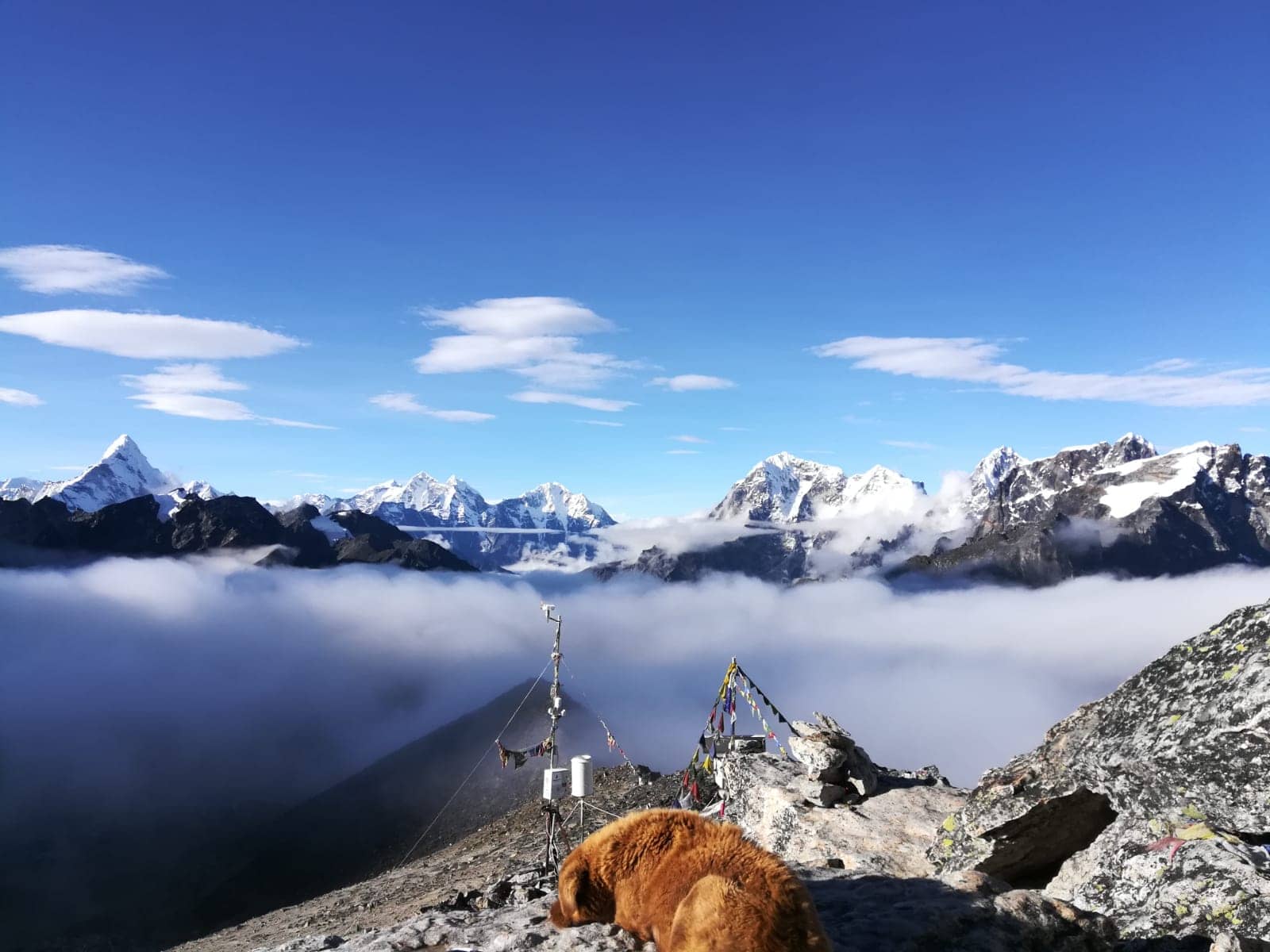 One of the most intriguing and complete treks is the Everest Three Pass Trek which takes you on a circuit around the Sagarmatha National Park and challenges you as you conquer 3 passes, all above 5000m mark. What’s guaranteed is the grand view of Mount Everest (8848m), Ama Dablam (6856m), Lhotse (8414m), and Khumbutse (6665m) throughout this trek.Khumbu region is best known as the destination for mountaineering enthusiasts as it offers opportunities for those willing to take up a challenge of scaling some of the highest mountains in the world. It is also a favorite destination for those willing to trek along the Khumbu region without having to climb the mountains.

Constantly amongst the top trekking adventures in the World, this trek starts in Lukla which is easily accessible from Kathmandu as you catch a mountain flight. From Lukla, you head north to the famous Sherpa town of Namche Bazaar along with a classic trekking route. This has been a trading point in the Khumbu region and is graced by tourists throughout the year. Heading east from Namche, we stride for Dingboche and consecutively to Chhukung village. Shortly after, you take up a challenge of scaling the first pass, Kongma La (5535m), and trace the trail to Everest Base Camp (5364m) from here.

This is followed by a trip up to the Kala Patthar, which is a vantage point of Mount Everest (8848m), Nupla (5885m), Lhotse (8414m), and Ama Dablam (6856m). Gokyo is our next destination and while there we scale the Gokyo Ri (5360m) having crossed the Cho La Pass (5420m). Resting a day and hiking around the Gokyo lakes, we commit to the final pass, the Renjo La (5360m). While the trek involves treacherous trails and passes requiring Herculean efforts, eventually this event will be a wonderful experience having trekked around the famous Khumbu region. Wrapping up our trek of the three passes, we head back to Lukla via Lumde and Thame. October to November and March to May are two seasons when you can take up the three passes trek.

Arrive in Kathmandu at the Tribhuvan International Airport. Meet our travel rep. at the airport. Transfer to trip hotel and check-in. Explore the buoyant city of Kathmandu. Welcome ceremony in the evening and dinner at a Nepali Restaurant. Overnight stay at a hotel in Kathmandu.

Second day of the trip, start off with a tour of Swayambhunath, an ancient Buddhist shrine resting atop a hill with a view of entire Kathmandu Valley, then onto Pashupatinath, an ancient Hindu shrine by the Bagmati river-flocked by many devotees, followed by Boudhanath, a Buddhist shrine with one of the biggest spherical dome- placed along an ancient trade route between Nepal and Tibet.Trek preparation in the evening, meet the trek leader and arrange trekking gears/ accessories. Overnight stay at a hotel in Kathmandu.

Begin your journey into the Himalayas with a flight from Kathmandu to Lukla. This 35-minutes flight offers a first-hand view of the Himalayas as you approach this beautiful town-starting point of your trek. Meet your guide and porter in Lukla, start your trek to Phakding with a gradual ascent and then a descent crossing Chheplung village before arriving in Phakding. Overnight stay at Phakding.

A major day of our trip, we set out for Namche Bazaar which is the most famous Sherpa town in the Khumbu region. Starting the trek, we ascend along a hill while crossing the Dudh KoshiRiver a few times before crossing Bengkar village and arriving at Monjo. This is our entry point to Sagarmatha National Park; one of the UNESCO listed world heritage sites. Passing by Jorsalle village, you arrive at Namche. Overnight stay at Namche.

Acclimatizing to high altitude, we will stay at Namche but take on a circuit to the village of Kunda and Khumjung while hiking up to the Hotel Everest View for a scintillating view of Mount Everest (8848m). First, we hike up to the Everest view Hotel and after capturing the view of Mount Everest (8848m), we hike down and take the trail to Khumjung. At Khumjung, we visit the local school and start again on the trails trekking uphill to Khunde village and Khumjung villages. Overnight stay at Namche.

Back on the trails, we head for Tengboche, which houses the largest Monastery in Khumbu region-Dawa Choling Gompa. A fairly easy trail to Phunki Tenga is followed by an uphill hike to Tengboche village. This village is located in the Sagarmatha National Park and is the terminus site of Sacred Sites Trail Project (a circular trail covering 10 monasteries). Tengboche offers magnificent views of the mountain range including Everest (8848m), Thamserku (6608m), Lhotse (8414m), and Nuptse (7861m) among others. Overnight stay at Tengboche.

Starting again on the trails we head to Dingboche. Starting our descent, we walk through lush green forests of Rhododendron trees with the views of Everest (8848m) and Ama Dablam (6856m) playing hide and seek in the backdrop. Crossing the Imja River after Debuche we stride for Pangboche. At Pangboche, the views of the Himalayas and its monastery are ever so inspiring and then we move to the Imja valley before climbing up to Dingboche. Overnight stay at Dingboche.

Today, we trek up to Chhukung village, which sits pretty in front of Nuptse and Imja Tse Himal. Taking the trail Northeast of Dingboche, expect a remote walk along the seldom traveled Chhukung Valley as you traverse the trail with nothing but snow-capped mountains ahead. With a fair bit of ascent and descent, you arrive at Chhukung village which lies in the glacial moraines. Overnight stay at Chhukung.

We stride northwest today as we set out for Lobuche. The main challenge for this day is the Kongma La pass at 5535m. A day full of the climb and a strenuous descent, we climb uphill leaving Chhukung village over the glacial moraines of Nuptse (7861m). Arriving at one of the highest points of this trek i.e. top of the pass, a welcome sight of Cairns and prayer flags overwhelm the senses accompanied by the majestic views of the lake down under and snow-capped peaks encircling this area. Descending the pass, you head further North crossing Khumbu Glacier before arriving in Lobuche. Overnight stay at Lobuche.

A long day of trek starts from the Khumbu glacier as you follow the trail along a rocky terrain. Ascending along, we reach Thangma Riju which offers a remarkable panorama of the Himalayan range. Further up, we trek to the top of Changri glacier before reaching Gorakshep. From here we shoot for EBC treading through boulders and rubbles. As we arrive, venture to unravel the icefall and frozen areas around EBC as views of Nuptse (7861m) and Khumbutse (5761m) is surplus to that of Mount Everest (8848m). We then head back to Gorakshep to spend our night.

Hiking up to Kala Patthar, it is another viewpoint and at an altitude of 5545m. Famous for sunrise views over the Himalayas. This 2-hour hike atop this rocky hill, all black and aptly named Kala Patthar, offers unobstructed views of the Himalayan range in Khumbu region. Descending to Gorakshep, retrace the trail back to Lobuche before further descending to the Dzongla taking the trail to the right as we arrive at crossroads. Crossing Cho La TshoLake and another, we arrive at Dzongla. Overnight stay at Dzongla.

Experience the mountains as you climb to Gokyo Lake via Cho La Pass. Start the trek ascending a valley to the foothills of a rocky wall as you arrive at the Cho La Pass. A challenging section with unstable rocks filling the trail, climbing up you can view the Ama Dablam (6856m) perfectly sitting in the middle at the end of the valley. Once at the pass, crossing the Cho La Glacier, observe the frozen ponds as you head for Dragnag. Gokyo is two hours from here and you’ll cross the vast Ngozumpa Glacier before arriving by the lake, mostly frozen. Overnight stay at Gokyo.

We take this day off our trail and stay back in Gokyo to hike up the Gokyo Ri (5360m). A climb up top rewards us with magnificent views of Gokyo lakes topped off by views of the Himalayas spreading over the horizon. Hiking back, we visit other lakes a couple of kilometers north of Gokyo village. While trekking to the fifth lake, you’ll arrive at Scoundrel’s viewpoint with serene views of Cho-Oyu (8188m) and Makalu (8463m) including the mighty Everest (8848m). Heading back, spend the night in Gokyo.

A long day of the trek ahead we head southwest of here along the Dudh Pokhari before descending onto Renjo La Pass. With the usual views of Himalayas, we’re greeted with that of Rolwaling range. From the third lake of Gokyo, you start ascending along a steep rocky trail to the top of Renjo La Pass (5360m). Striking views of the Everest are supplemented by that of Gokyo Lake, village and the Ngozumpa Glacier. The final stretch of walk involves a trail along huge boulders as we arrive in Lumde. Overnight stay at Lumde.

Wrapping up our trip of the passes we descend in search of lush green land as we hike down the trail to Marulung. Heading down the valley, we follow an ancient trail used by traders. Meeting the Bhote Koshi River, we cross it as we go downhill to Taranga. Further downhill and after crossing the river a couple of times we reach the Sherpa village of Thame. Overnight stay at Thame.

We set out for Phakding today to complete a loop that is the three passes trek. While there are two ways out of Thame we take the one passing the village of Kongde. The trail runs along the ridges of hills as we descend to Phakding. Having exited the Sagarmatha National Park, we arrive in Phakding. Celebrate the entire trek with a drink as you spend your last night in the Himalayas. Overnight stay at Phakding.

Last day of your trek in Khumbu region, you first descend and then gradually ascend to the town of Lukla. Retracing your way back along the main trail, passing lush green rhododendron forest, you trek downhill along the Dudh Koshi Valley. As you arrive at Chheplung, you start your ascent on to Lukla. Once at Lukla scramble to the Airport to catch your flight back to Kathmandu. Overnight stay at a hotel in Kathmandu.

The final day of your trip, you can take a tour of the Thamel tourist market and the Basantapur area for last minute souvenir shopping. A travel agent will drop you off at the airport where you can catch your flight back home.

To receive our best monthly deals